This morning, I brought the Patio Pickers out of the tarp-shelter,  attached the casters, washed away the dirt. I made the “investment” last Fall and feel compelled to “try it out.” 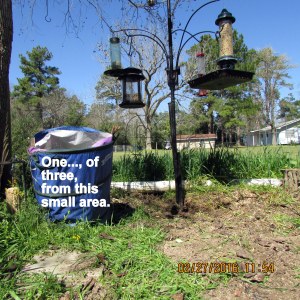 Started pulling weeds!! It’s a BIG job and “somebody’s gotta do it”!!

I’m very happy with my Garden Tower 2 but found the alternative and thought I’d share with my readers. Frankly, I think I can grow more veggies in my tower or, stated another way, several Mini-Farm Grow Boxes would be as expensive (or more so) than my Garden Tower.

Either way, I encourage you to invest in your own health; grow your own veggies!!

Gratefully, the wind has stopped!! I didn’t expect thirty-six degrees overnight. Hopefully my tender plants will survive?! I’m feeling “puny” after spending time, yesterday, in the wind and cold. 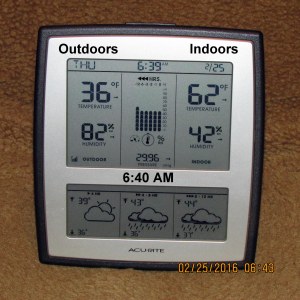 The wind was relentless; I could not sleep. Gratefully, the wind has subsided (8:00 AM). Look: Consider the force of the wind that toppled a planter full of wet soil. 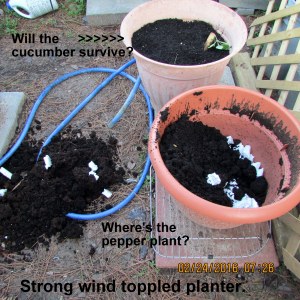 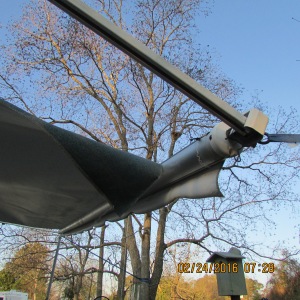 Cold and wind-blown, I’m back again at twelve-thirty. The wind has less force than yesterday but very disagreeable to work in!! **BUT** there were tasks demanding attention. As I approached one “must do,” I found another project, or two. 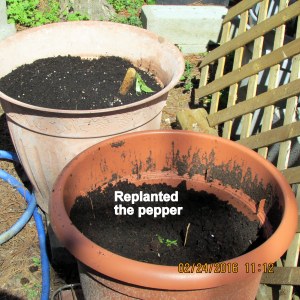 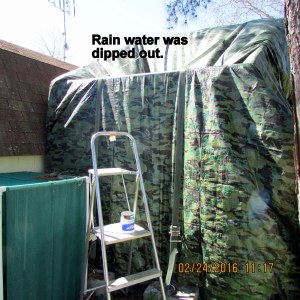 Mid-afternoon, I hoped to accomplish a few more task in the yard. I was limited to separating the planters. It is too disagreeable outdoors!!

This poster was copied from a friend’s Facebook page. It really “speaks” to me because I’ve been frustrated with a friend/acquaintance that is a nasty, ornery, disagreeable, ungrateful, inconsiderate man!! I keep thinking “How dare he treat me this way when I’ve been so kind to him?” He hasn’t another friend in this world; his family is (likewise) frustrated!! His application was turned down–to join our little community here at CARE. This time next week, he will be in an assisted living facility and it will inevitably kill him. (He is a “loner”; a nasty, ornery, disagreeable, ungrateful, inconsiderate man incapable of sustained independent living.) ~~ See how I’ve judged him?? But how do we stop making comparisons?? How do we “turn the other cheek” when used and abused?? How: Agape love!! 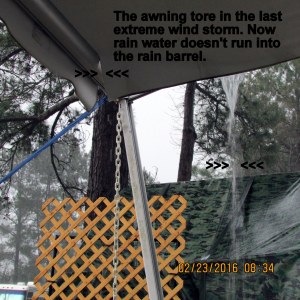 After many weeks without rain, we were drenched!! Sunday night/Monday morning we had a gentle rain (one inch) and I could “keep up” with the accumulation in the blue bucket. This morning, I could not “bail” water fast enough!! I COVET RAIN WATER (my plants love it)!! My rain barrels were empty and all that beautiful water would be lost if I didn’t “catch” it. Unfortunately, the awning tore in the last major wind storm so water pours off the awning at an inconvenient location (and I can’t/won’t move the rain barrels). Planters were swamped!! I’m surrounded by what I affectionately call “Lake Lorraine.” ~~ Today’s “bailing” (water) and “shifting” (plants) is mild compared to my “work” the next few days: PULLING WEEDS!! ~~ FYI: “Deflappers” were ordered last week and I hope/pray they secure the corner of the awning so run-off into the rain barrel.

Almost ten AM as I publish this. The rain has stopped, the sky is clearing and I think there is a hint of sunshine.

Postscript, same day, three-forty PM: The wind is relentlessly whipping the awning; my trailer is rockin ‘n rollin!! I wanted to work in the yard but “too cold” (even with a coat). ~~ A CARE resident lady-friend phoned to offer me some plants before she tossed them in the trash. I walked to her trailer–with a planter–and rescued a large clump of unknown perennial. BUT before the trip to her home, I found the drenching rain had invaded my tarp-shelter. I dumped copious amounts of water out of  starter planters. There is, conservatively, thirty gallons of water sagging the tarp on the back side. “Too cold,” and I’d need to borrow a ladder, so that task will wait until tomorrow.

Postscript: The 5:00 PM evening TV news meteorologist said the wind gusts are thirty-five to thirty-nine miles per hour!! ~~ I’m not going out to measure but I suspect the awning has torn another three or four inches. 😦

Postscript: The 10:00 PM TV news meteorologist confirmed the wind has been gusting between thirty-five and thirty-nine miles per hour!! He said “…and thirty-nine is ‘tropical force’.” Overnight, temperatures will drop into the thirties (and my plants are vulnerable). ~~ Much damage in Louisiana and other southern states from this storm. Severe damage in an RV Park, deaths at another location.

A “cold” has slowed me down!! Actually, it brought me to a standstill. Beautiful weather; so much to do in the yard!! The weeds are growing exponentially and need to be annihilated.

Postscript @ 4:00 PM: I went back to bed at nine o’clock but was on my feet, and dressed, by nine-thirty. Too much to do; I didn’t  stop until approximately four PM. Lettuce seedlings are in the Garden Tower. Green onions, radishes, and Redina lettuce seeds sown in “starter.” More details on my other blog. 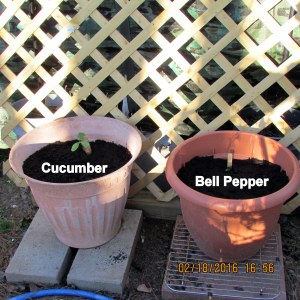 The cucumber seedling, and bell pepper seedlings, were the first transplanted this morning but late afternoon before I thought to take a picture.

“Too soon old, too late smart!” Seventeen hours later (postscript) and I realize I goofed when I planted radish and green onions. They are root vegetables and should be planted in a different phase of the moon. I’m “trying” for a successful garden; I’m studying Old Farmer’s Almanac (on-line) but mindlessly prepared the cubes and planted the seeds!!

Raw apple cider vinegar has been a staple in my cupboard for decades. Today I read this article on the Internet and rushed to gargle for my sore throat. I’d been gargling with salt water. Perhaps I’ve “caught a cold”?

Most of the time a sore throat is nothing serious—and if caught early enough a common sense remedy like ACV can save you hours of time wasted at the doctor’s office—and a hefty co-pay IF you have insurance!

Cold–or no cold–I didn’t let it slow me down!! I completed a garden project; see my earlier blog titled Planter project for neighbor.

Honestly, I also accomplished a dozen other projects. No pictures. Now it is time to “sit down and relax.” 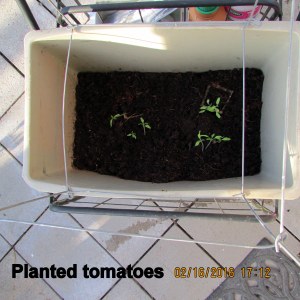 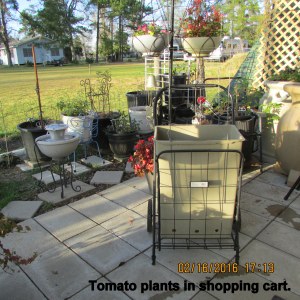 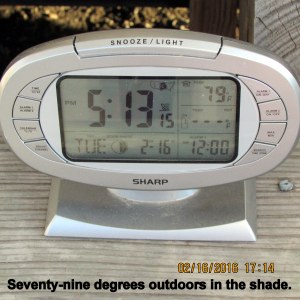 One more Mandevilla to plant!! The “free” container (from recent delivery of trees to CARE) is stabilized with a 2 x 4, and screwed to the fence post. If the several Mandevilla survive, and thrive, the Hummingbirds will be very happy!! Alternating with planter project, I was mixing more coconut fiber (coir) with not-so-old soil. ~~ Believe it or not, I’ve used my large collection of “pebbles for planters” (friends and neighbors were so generous with vitamin and prescription plastic containers). For the bottom of third container (for my neighbor-lady-friend), I cut up a couple of Styrofoam containers. They will be drainage when I get “a round tuit.” (I’m too pooped to do it today!!) ~~ It’s cooler today but still extremely nice and a great day to work in the yard. Seventy-three degrees (outdoors) as I type this at two-twenty. (I’m indoors for a brief rest and cold water.) ~~ I transplanted a number of  pink Chi Chi Ruellia into planters with purple Mexican Petunia. They are the same “family” but Mexican Petunia are tall and Ruellia are small. (Forgot to take pictures; too tired.) 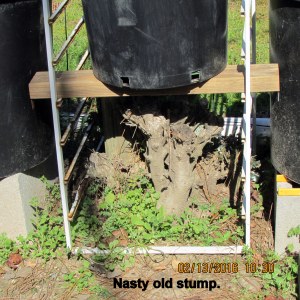 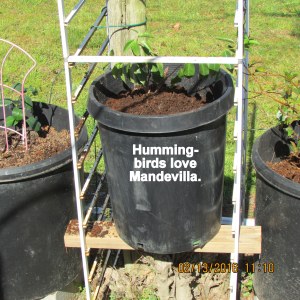 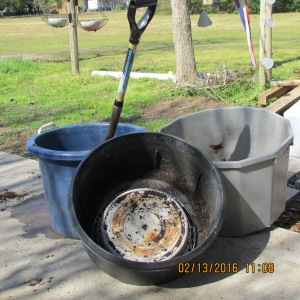 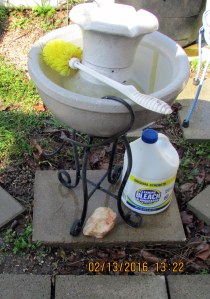 Beautiful “Spring” weather (although, officially, still thirty-six days until Spring) and I spent almost every minute outdoors on projects. Mixing the planter soil is no small task: Add soil to coir, mix, add more, and mix!!

Change of plans (again). I intended to prepare the two large black containers–with plants–in front of the Thrift ‘n Gift Shop. “No,” they would interfere with the riding lawnmower!! I decided to swap the Mandevilla plants from the gray planters. (No more huge planters for me!! Too much work and too much soil!!) I hydrated coconut fiber (coir) and carefully added the soil from planter. That soil–and more–because the black containers are about twice the size of the gray planters. 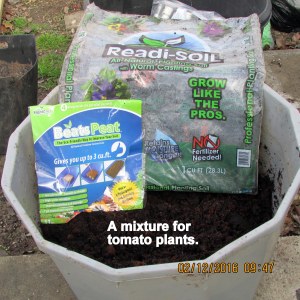 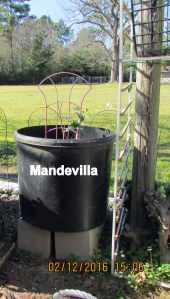 Gratefully, my friend, David Wolfe, used his “know how,” and strength, to stop my water leaks!! 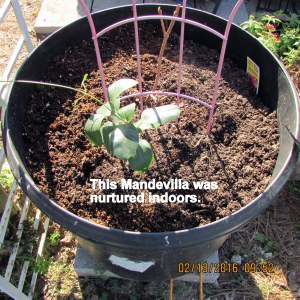 This plant has quite a history: Mandevilla experiment, and Indoor project. 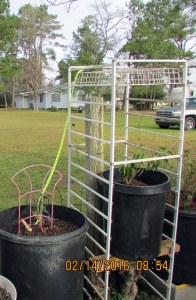