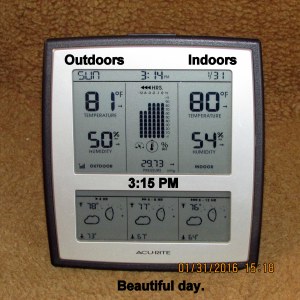 Sixty hours earlier, it was fifty degrees colder!! ~~ Very few planters remain under the tarp shelter.  I’ve moved most… so they can enjoy the sunshine. Perhaps I’m premature; maybe I’ll regret transferring them when/if we have more low temperatures. Remarkably, I have seventy-five plants enjoying this incredibly beautiful weekend. (I didn’t count my large planters with perennials.) ~~ I washed the nine planters acquired on Friday. It didn’t help their appearance but I know they are clean (and ready for plants). ~~ I drilled holes in more planters. I secured a “cage” to the top of a planter prepared for one or two tomato plants. ~~ Gospel truth: Most of the seventy-five are plants and planters I will give away!! This Spring and Summer, my emphasis will be growing veggies for yours truly. 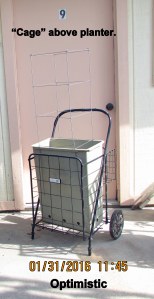 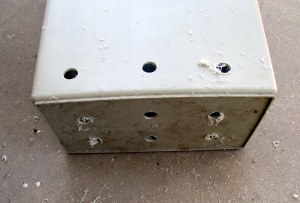 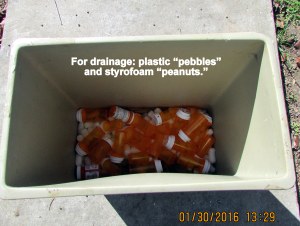 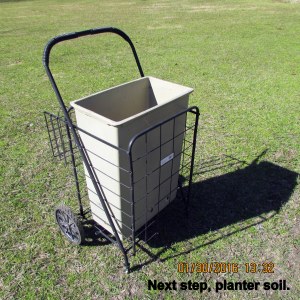 “Mobility” is the topic foremost in my mind. “How can I navigate planters in and out of the sun?” I won’t plant tomatoes in the Garden Tower–but I want several tomato plants. A very old, sturdy wastebasket would fit in the shopping cart and be excellent (imho) size-wise and movable. That was one project (of many) yesterday. 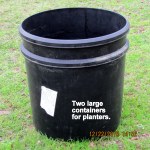 This is similar, in appearance, to the large planters I’ve received free. However, this is much smaller–and look at the price. Granted, $6.00 for a planter is reasonable but I speculate a planter four times larger (like mine) would cost at least $20.00. So, I’m counting my blessings for the generous gift of containers from the farm store. 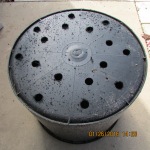 I started this message before nine o’clock “just because.” (“Just because” I have a one-track-mind focused on gardening and I had just ordered more coir planter soil.) Then I grabbed my camera and walked to the other end of the CARE RV sites. Trees were delivered and planted on sites without trees. I asked one young man “What are you going to do with the planters?” His reply: “We recycle them; why?” I said “Can I beg, bribe, or buy them?” He checked with the supervisor and affirmed that I could have them. They are battered, and dirty, but I think they will clean up and be useful for my major plant projects.

I put an old saying into practice: “Make your head save your heels.” Last night (sleepless) I thought about getting a set of shelving out of the storage building (the on-site storage building). This morning I wrestled to extricate it from its location.  “Yes,” a great place to have small planters during nice weather. But casters would make it even better (imho). I made a trip to Lowe’s for casters (and didn’t flinch at the price because they are labor-saving). I have so many “baby” plants that need to enjoy some sunshine but need shelter from rain and cold.  Many more “babies” when I start planting the Hen and Chicks. 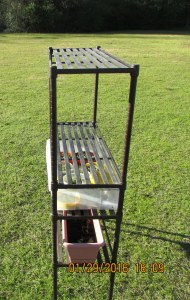 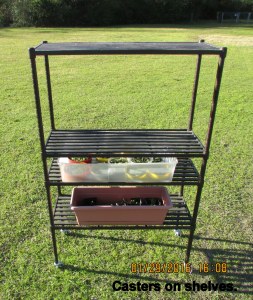 While in Livingston, I shopped three thrift stores–for saucers underneath my creative planters. I have a very nice selection now. Remember, Money Moss, and Hen and Chicks, have shallow roots so I previously shopped for skinny bowls. (Finis, the end, no more!!) 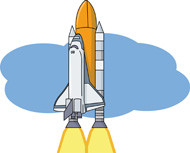 Yours truly was working at NASA, Edwards Air Force Base, California. I was secretary to the Project Director, sitting at my desk while most employees gathered in the boss’s office to watch the launch on closed circuit television. (Launches had become routine so this one was not being broadcast “live” by the networks.) From my desk, I could see the TV and was horrified to see the Challenger explode. That experience is still indelible in my mind!! The shuttle program shut down for many years; many employees lost their job. 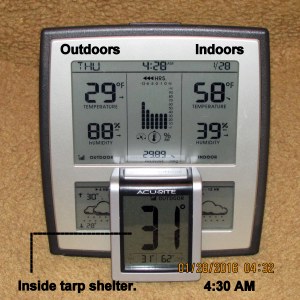 “Nursemaid“ here. The cactus soil will soon be here. I need planters for Hen and Chicks, Kalanchoe, Begonias, Money Moss, and Christmas Cactus. I made a special trip into Livingston to shop for inexpensive containers. First, a Thrift Shop where I found a dozen suitable items (for $7.00). Second, to Dollar Tree when I discovered a bonanza: Attractive medium-size plastic planters, and small “clay” pots ($50.00). I purchased more than I initially need but wanted to buy (from Dollar Tree) while they are available. There are seventy-nine “planters” in the white storage basket–and many “thrift” saucers (earlier shopping trip; underneath planters) stored in a cardboard box in the back of my KIA. 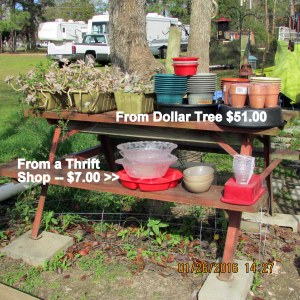 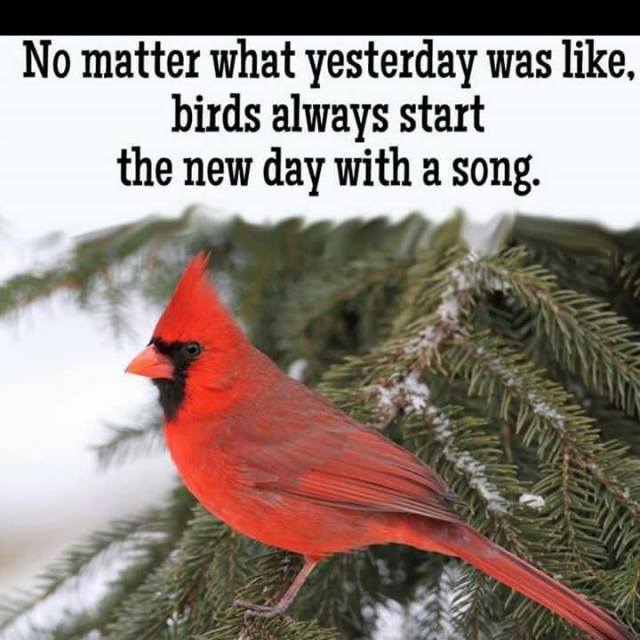 A neighbor complains 😦 ; she wishes the birds didn’t sing, or tweet, until noon!! ~~ With over a dozen bird feeders in my yard, I enjoy the early morning songs!! 🙂 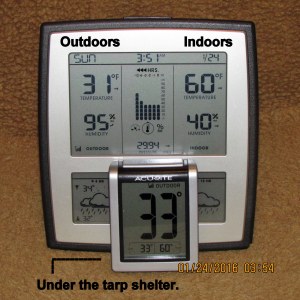 Two years ago, this date, we had snow!!

Counting my many, many blessings! (Then and now!!) 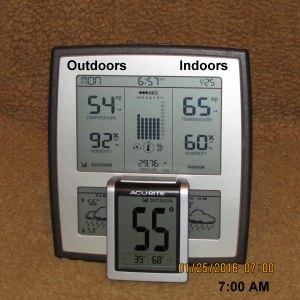 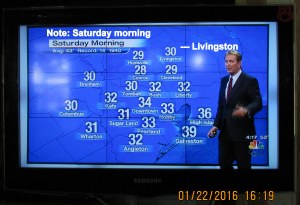 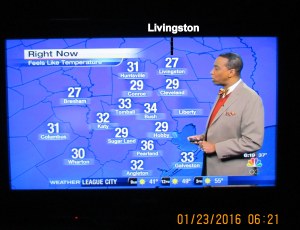 Out of bed to check the temperature. Quickly back under the covers!!

Yours truly is obsessive about the temperature for her plants. It’s forty-five degrees outdoors as I type this at 10:30. The two thermometers under the tarp shelter record forty-four degrees. Hopefully none of the plants (outdoors or under the tarp) got too cold. Another cold night is forecast—for Sunday night/Monday morning —so I’ll leave covers over the outside plants.

I find it curious that the temperatures vary from thermometer to thermometer. It is 58 degrees outdoors–and no wind–so I should grasp this opportunity (after two days) and work in the yard!! 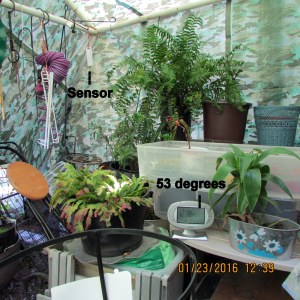 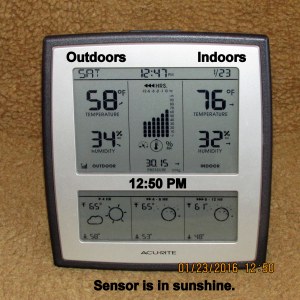 Look what was just delivered from the CARE patio-garden “under construction.” Things are getting out of control; I have too many plants!! However, I couldn’t say “no”; after all, I’m the “plant person.”  These Hens ‘n Chicks are a new experience for me!! They look woefully neglected!!  (I checked the Internet so I’d know how to work with them.) I’ll try to separate them into smaller planters for sale at the Thrift ‘n Gift Shop. (They look puny so I may need to nurse them for months before they are attractive enough to sell?!) ~~ More planter soil and containers; oh woe is me 😉 !! 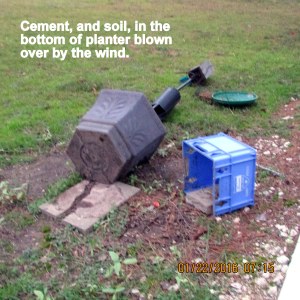 The local morning TV news advised the viewers of “freezing” temperature all over the area. Due to the wind gusts, the “feels like” temperature listed ten degrees below documented number. I didn’t sleep well due  to wind shaking my trailer home. It is supposed to warm up “slightly” so I will brave the cold and cover my large plants. ~~

I was shocked to see the Bluebird house and feeders on the ground. There is approximately thirty pounds of cement at the base of the pipe supporting the bird house. Likewise a similar weight of planter soil (that’s a large planter). I won’t be able to move the planter alone.

Our weather is mild compared to the miserable conditions north and east of us.  The predicted snow fall will cripple many cities (including Charlotte, North Carolina, a former “stomping ground”).

I won’t bore you with pictures of all the plants I covered. You can see an earlier effort to protect my perennials in large planters. One exception: I recently purchased a large “frost blanket” capable of covering several planters at one time. ~~ Temperature is forecast to dip to twenty-eight degrees (or colder) tonight. 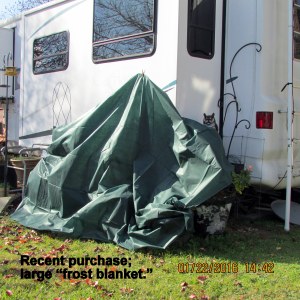 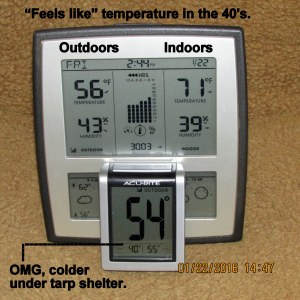 My second Garden Tower was delivered to the sidewalk. I didn’t know it was here because I hadn’t been outdoors for two days. (I have plenty of good groceries; I don’t need to go to the CARE dining room.) I’ll move the Garden Tower to my storage unit (down the highway) until ready to use it. 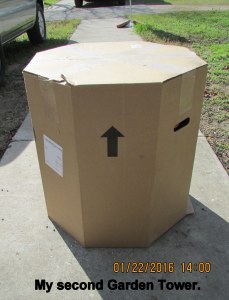