Pictures taken through the glass, from my kitchen window. After six days, sunshine is welcome sight.. 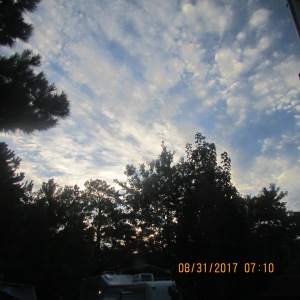 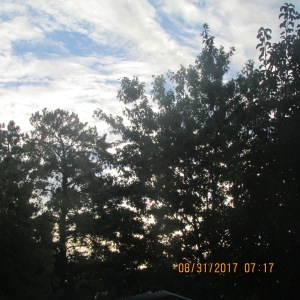 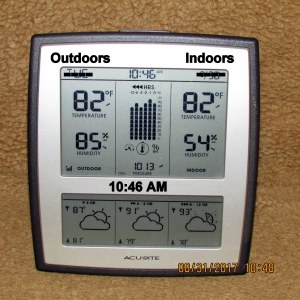 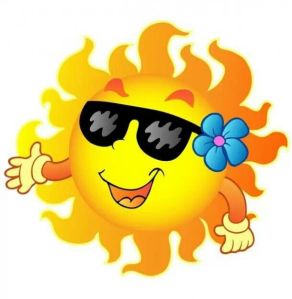 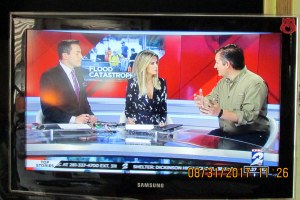 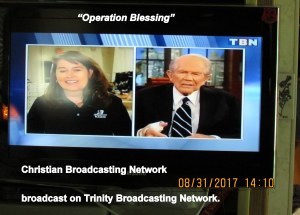 “Operation Blessing“ was positioned in Texas before Hurricane Harvey hit the Gulf Coast at Rockport. Reportedly, they are the only aid providing assistance in that devastated community.

Here’s more information about the decades-long Festival. ~~ A Ruby-throated Hummingbird on one of my feeders. 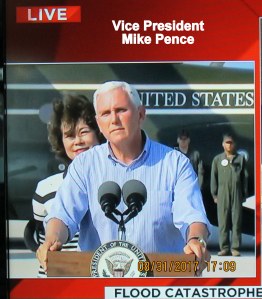 Can’t sleep; wide awake for a couple of hours. I’m impressed/concerned by the “silence.” No night sounds whatsoever; no traffic on the highway. That is unusual. I turned on the TV and (at this hour) regular NBC programming (and nothing I wanted to watch). ~~~~ Wait…, listen: It started raining at 4:10.

My little rain gauge has documented approximately fifteen inches of rain since Saturday, August 26, one PM. An unscientific weather report.  🙂 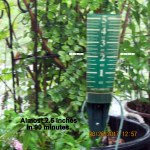 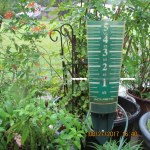 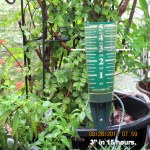 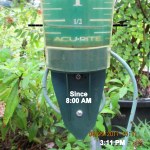 Telephoto pictures from entry steps because I didn’t want to go out in the rain. That was (is) my second Garden Tower. Several residents wanted to set it up in the CARE garden–and grow some fresh veggies. Our Facility Director vetoed the project. LORRAINE is guilty (repeat: LORRAINE is guilty) of not moving the original cardboard box full of “rings” to a dry (drier?) location.

FYI: If you are watching Harvey aftermath television coverage, you see sunshine and no rain. However, I’ve had steady rain since 4:10 and no hint of sunshine. Wind, too, but not strong enough to worry. No confirmation but I speculate we are on the “backside” of Harvey moving into Louisiana.

~~ OK, OK, confirmation at 9:40: Senator Ted Cruz talking about Beaumont being hit by the tropical storm. At 9:44, Houston TV meteorologist said “Beaumont is taking a beating.”

How many residents at CARE and/or Rainbow’s End RV Park considered that Lake Livingston might “flood” the surrounding areas?? Honestly, it never occurred to me!! I’m just deep in thought, and steeped in TV disaster news. NO news of flooding in our area; only one brief statement by TV meteorologist regarding “Trinity River is flooding at Goodrich.” ~~ Correction (10:45): Now the meteorologist’ (plural) are talking about Lake Livingston (a man-made lake) and Trinity River flowing south to Houston. 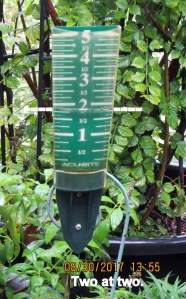 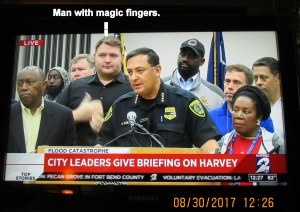 All this water!! All this media coverage. However, an email message arrived from a follower and his subject line “Water? What Water?” Portions of the message follow:

There are nine fires visible from Bend. Actually, if it weren’t so smoky nine fires visible. Not a cloud in the sky for ten days, but you wouldn’t know it because we haven’t seen the sky in ten days. Well into our fourth straight week of 95+ degree heat with the only relief in sight the inevitability of winter, and no precipitation since early May. Three fires on Newberry yesterday afternoon started from the exhaust of an idling vehicle in dry grasses, two more spotted off of that, one at that timeshare RV park at Vandervert Rd, and a fire south of LaPine has closed the highway. A cigarette butt…  fire…  yesterday morning blew up so fast it closed all three of the Santiam passes by mid-afternoon. Big one going up in the Alpine wilderness and there’s another just north of that in the Jefferson wilderness, both of which are threatening the pass to Portland. The town of Sisters has been evacuated. Everything about this place has an other-worldly feel to it.

(Lorraine) The following sentence is alarming: “It could burn from Mt Shasta to Southern Alaska.” (Lorraine) Mount Shasta is Northern California so the implication is three states (California, Oregon, and Washington) and British Columbia, Canada, are burning.

(Lorraine) His closing sentence: “The sooner summer is over the better.” He read my clip art.

Lorraine here with a question: Have I been Rip Van Winkle? Have I been asleep for twenty years? I haven’t seen TV coverage about those severe fires in Oregon. Why, oh why, too much water here and too little there?

Houston NBC-TV was finally able to get their helicopter up, and over the area.

We continue to learn of deaths when people drive into flood water.  One young man was helping his sister evacuate and was electrocuted by electricity in ankle-deep water.  ~~ I continue glued to local TV coverage. I haven’t left my home; I’m still in my nightgown; I haven’t combed my hair. I’m “emotionally invested”  in this tragedy. I wish I could volunteer but (truth be told) volunteers are being turned away. (And I live too far from the civic center and the two large shelters.)  ~~

I’m so sad but praying for rescued, and rescuers; for reporters and camera-men (in the raw weather) and those, at the “anchor” desk, sharing details with viewers. 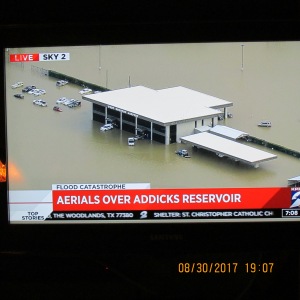 Heartwarming stories of dramatic rescues. TV reporters interviewed volunteers who arrived from locations around Texas and Louisiana. Furthermore, California, Utah, and New York sent men and equipment (undoubtedly other states, too). Samaritan’s Purse and Operation Blessing are here. ~~ Houston residents (volunteers) are assisting officials, and staff, at the Convention Center (and other locations). One facility, alone, has more than nine thousand displaced men, women, children and pets. ~~ “So much outpouring of support” according to one Staff person. 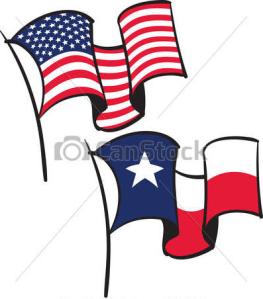 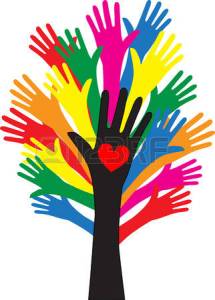 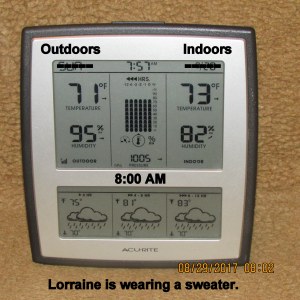 Gratefully, inside my trailer home is dry. Sadly, one resident says she is “bailing water.” I’ve lived in this trailer forty-three months and paid TWICE for roof repairs.

“Wise” about roof repair, “dumb” today at eight o’clock. Without a raincoat, I dashed out to take a picture of the rain gauge (and empty it), Almost soaked in two or three minutes!! Evident by limited amount of rain in the gauge, we have experienced limited rainfall the past twenty-four hours.

(Have you noticed my dedication to details? I like to take pictures “on the hour.”}

#1: Ignore the blue line route; “we” use 59/69. #2: President Trump, Dr. Ben Carson, and others are in Texas. We saw a recent news conference. ~~ The maps give my out-of-state readers an idea where we (CARE residents) are located. The second map shows one of the newest areas of concern: Kingwood. That is a very large subdivision area–and it is flooded.

One of two trips to Kingwood documented on my blog. That “larger than a Walmart” H.E.B. market has been open during recent several days of horrific weather. We hear the H.E.B. chain-of-markets (big business) sent truckloads of food to the shelters. One shelter has nine-thousand (9,000) evacuees!!

Excellent information, today, on the Christian Broadcasting Network (CBN) 700 Club. I had a “need” to see “Harvey” from “other than” the local news broadcast. Additionally, there was a very informative interview with Kellyanne Conway about her friendship and working relationship with President Donald Trump. ~~ (With my “through-the-air” antenna, I have fewer TV stations [and that’s OK with me] and Houston NBC has, understandably, preempted all other programming. Probably won’t see America’s Got Talent.)

Rained all night; three inches in the gauge, 5 PM until 8 AM. Local TV disaster programming exclusively; no Today show. 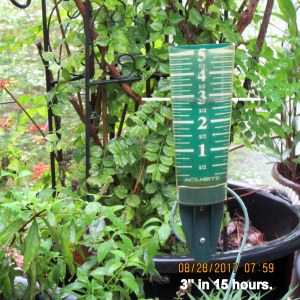 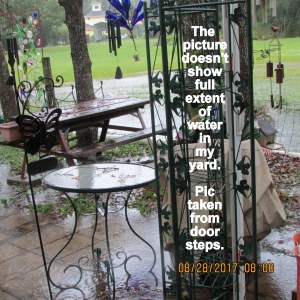 Press conference with Houston Mayor, Police Chief, and other emergency management personnel. I was mesmerized by the young man signing in both English and Spanish. Without hesitation, “rapid-fire” translation of the message. 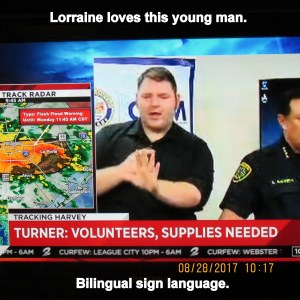 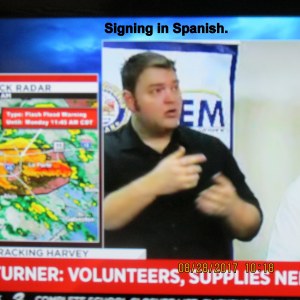 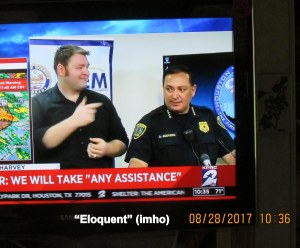 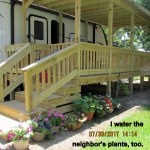 A brief period of time without rain. Next-door neighbors are out-of-state and I’ve been watering the plants. Currently, “too much water” drowning the plants with water off the roof. The yard was ankle-deep with standing water. 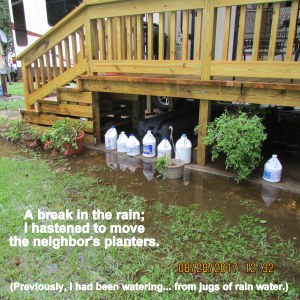 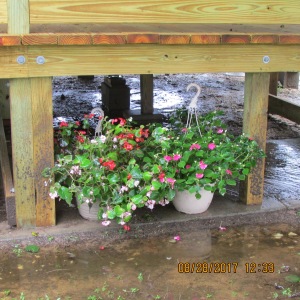 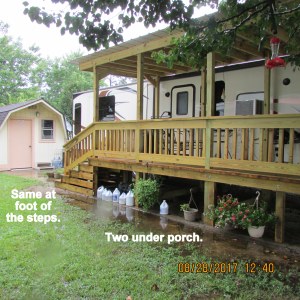 I’m so-o-o-o depressed!! I will not turn off the TV or change the channel; I feel compelled to watch the continuous coverage of Hurricane/Tropical Storm Harvey. I opened a bottle of SAM-e to take medication for depression. (Truth be told!!) It will be several days before it actually elevates my mood?!

In an effort to move from huddled position in my easy chair, I returned to the scanning project. Several days ago I brought boxes of genealogy into my trailer home (ahead of the storm). I only have “wiggle room” in my living room.  😦  This is a healthy diversion (imho).  🙂

For comparison: The wonders of “live” television, remarkable computers, and WiFi, versus another era. Here is a picture of my great-great-great-grandmother Aletha Coffin (1798-1891). Yes, she actually spun material with that wheel (not a prop).

It was so extremely encouraging to receive the following email message from a T@B Teardrop Trailer Travels friend. (One… of several. “Thank you, friends.”)

I am so sorry you and a large chunk of SE Texas are going through this terrible time, and I too have been following the news pretty closely, although from the safety of California (I was going to say “and comfort” but it’s 108 degrees today).  I  hope you keep safe.  It’s hard for me to see from the weather maps how Livingston is doing.  It looks like you will get more rain, but maybe not so much that you get flooded out of your home and the Care center(?)
I do find your leadership in the Texas governor and the Mayor of Houston to be quite impressive.  I am also inspired by all of the neighbors and total strangers who are helping rescue people.  I have been depressed myself by the news from Charlottesville and the growing political divide in our country.  Your tragedy, as bad as it is, shows that we can still work together as human beings.  No one, as far as I can tell, is checking on someone’s political views before they rescue them….A lesson to us all.
I hope you continue to be safe.  I have heard that exercise helps with depression as much as most drugs.  I’m not sure how you would manage exercise in a cramped trailer, so perhaps this is no help to you…perhaps if you go out for a walk (or swim) or bench press some of your files that need to be scanned?
Anyway, keep up the good work.  You are doing all that anyone can do in such a stressful situation.  You inspire me. 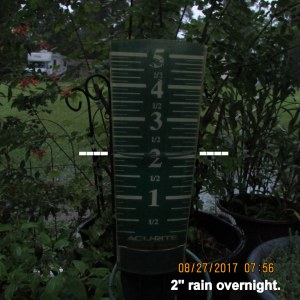 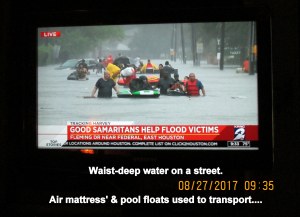 Seven inches total–documented in my gauge–seemed heavy. Another resident said she had seventeen inches total the last couple of days. (I’m still glued to the TV.) 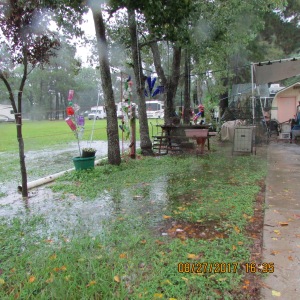 I’m being honest, not being dramatic: I’m so grieved viewing the tragedy unfolding a few miles down the highway.

Gratefully, not in my neighborhood!!

Still dark outdoors (6:00 AM) but I checked and not a drop of rain overnight.