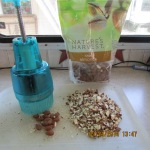 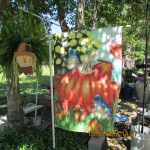 Well, almost the best. The raw almonds and dried apricots were getting old and (IMHO) “not for human consumption.” ~~ I worked in the yard because such a pleasant day–weather-wise. I was pulling weeds and got into an area with fire ants. Instantly, they were all over me. I’m really suffering from their attack. Even Cortizone-10 Intensive Healing Formula isn’t relieving the itch!!

Yesterday, I very slowly flooded the area where a critter dug a hole. Later I filled in the dirt and hosed the extra dirt from the patio.  Today, no new digging so I did a thorough job of  cleaning up under the trailer and on the patio. Flower pots stored under the trailer were washed and put away. Likewise, tools went into the little storage building. I hung garden flags for Fall (originally on display in North Carolina). 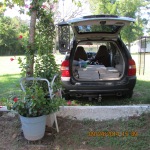 Later (actually 4:15): I bought fourteen paving blocks and will continue that project now that the weather is cooler. I had my “breakfast of champions” this morning (but not Wheaties) so I could lift and carry five hundred eighteen pounds!! (Thirty-seven pounds at a time.)

One comment on “Only the best for my birds !!”