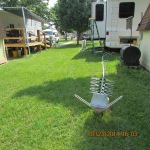 Despite the heat, I worked on the antenna this morning. This afternoon, a trip to Lowe’s for a few more fittings. The antenna is light weight but at the end of the PVC-pipe it feels heavy. I couldn’t hoist it alone. After the evening meal in the Dining Room (lasagna), a volunteer (strong young man) helped me hoist the antenna. It was a surprise to observe that rigid PVC became very flexible.

I’m disappointed!! I consider that arrangement “temporary.” Furthermore, after another scan for channels, I’ve no better reception than when at lower location. I gained channels but they are all Spanish and two Japanese (or Chinese?). I don’t have ABC or CBS. The antenna rotates 360 degrees so I’ll keep trying to improve reception.

Twenty-twenty hindsight (Thursday, July 24, 2014, 8:00): The antenna is eighteen feet off the ground. At that height, I’m receiving forty-two stations. ~~ Sooner or later, I’ll put the TV antenna and WiFi antenna on a tall metal pipe.

8:40 AM (Thursday, July 24, 2014): Hallelujah!!! I have CBS This Morning. I love, love, love Charlie Rose. I haven’t seen Charlie since I left North Carolina more than nine months ago. I used to follow him on PBS, too.