Lunch with Jo and Klyde

When I logged-on I was bombarded with advertisements attached to videos. Furthermore, Google has added other web links imbedded in my blog message. I do not like to burden my reader with that unwanted information!! Please forgive….

Postscript, Friday, Nov. 22, 2013, 4:30 PM: Gospel truth!! I have spent all my spare time, for several days, attempting to resolve real (or imagined) problems with my laptop computer. Not only unwanted advertisements but I could not attach photos or clip art. I posted my dilemma on the Word Press forum and received an answer that ultimately helped me resolve the problem.

If we could see inside others’ hearts. ~~ I haven’t documented their scenarios (yet) but I know there are heart-rending stories all around me: Residents, and volunteers, at CARE. 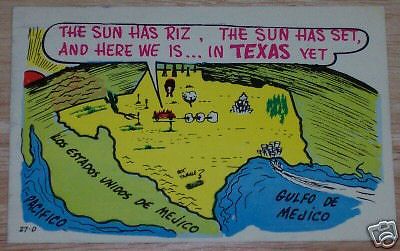 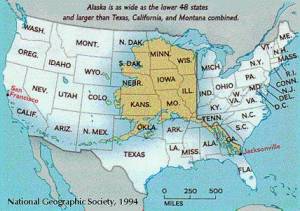 Decades ago, traveling through Texas, we purchased a post card with the comment: “The sun has riz, the sun has set, and here we is in Texas yet.”  (The postcard [left] is for sale, on eBay, for $15.00. Not my postcard, LOL.) Out of curiosity, I did a Google search and found many references.  ~~  Most RVers I’ve met have been to Alaska. Here at the Escapee RV Park, and CARE Center, a day doesn’t go by without conversation about the beauty and grandeur of our forty-ninth state.  ~~ This evening I was visiting with a man from New Brunswick, Canada, and I enthusiastically shared details of my trip to Bay of Fundy and Fundy National Park. ~~ There are numerous blog messages regarding my visit.

Nine years ago today (Tuesday Nov. 2nd, 2004; election day) I was still in Lancaster, California. All my possessions had been loaded into a moving van the day before. I slept on the floor of my vacated mobilehome. Before leaving the area that had been my home for forty years, I voted. ~~ (Tuesday, Nov. 5th, 2013; election day.)

I traveled as fast as I could across the United States (over 2,000 miles) in my little KIA Spectra. I encountered weather hazards, construction and accidents that delayed me for hours!! I barely arrived in Brookville, Ohio, before the moving van! I was exhausted, and stressed–and had phoned friends to keep me in their prayers.

Boxes of family history had been marked and loaded last into the moving van. They were unloaded first at the rear of the Brethren Heritage Center (in Brookville, Ohio). Over fifty apple boxes (and other sturdy containers) of FRANTZ, and collateral lines, genealogy. Also microfiche reader, computer, printers, cork boards, white boards, large picture frames, office supplies, and more items too numerous to list.

The remainder (on the moving van) was  moved into a nearby storage facility. I did not have an apartment yet.  ~~ The moving expenses were paid-in-full but I wanted to recoup the expense. I was hired as a holiday temporary employee at Sam’s Club. After Christmas I was hired by a new Walmart opening in Englewood, Ohio. I was there for eighteen months.

I moved to Ohio fully believing I’d be a volunteer at the Brethren Heritage Center. I was thoroughly qualified and would have been an asset. My enthusiasm, energy, knowledge and a few other things (but that’s another story) were an obstacle.

In October 2006 I moved my possessions from an apartment to a storage facility. (I rented one large enough for my KIA Spectra.) I was crying uncontrollably as I drove out of Brookville en route to Shelby, North Carolina. This trip was in my Dodge Class B mini-motorhome, pulling a small cargo trailer.

The Woman’s Retreat at Hallelujah Acres (HA) was my destination–and it was wonderful!! I had been trained by Hallelujah Acres as a Health Minister many years earlier and had taught (and lived) the concept in California. ~~ I became acquainted with the manager of the HA Resource Center and she encouraged me to apply for a job. Repeatedly (every time she asked) I said “They wouldn’t want this old lady.” To please her, I applied and was hired within hours. First I was using my computer skills in the Call Center. Later I had multiple jobs from prep for seminars and conferences, proof reading magazine prior to publication, contact with folks interested in buying homes in the planned community adjacent to HA–and work in the kitchen when short-handed.

END_OF_DOCUMENT_TOKEN_TO_BE_REPLACED

“Uncle”  almost!!  I’m ashamed to confess that I would have hitched the car and trailer, and departed, a couple of days ago. However, we had severe rain (unusual for this area, I’m told) and I didn’t want to crank up the four stabilizer-jacks, and hitch vehicles, in a downpour!! ( Someone said we had six inches of rain.) ~~  I acknowledge that I am ultra sensitive and am easily hurt. Furthermore I see myself as a “lover not a fighter.” Another figure of speech: “Fight or flight.”  (I was taking “flight” because my team-mate [volunteer] was out to crucify me.) ~~ Staff members rushed to assure me that I’m a new valuable member of the CARE family.  ~~ Considering the love and affection I’ve received, I have decided to make this my permanent home. Below are pictures of the site I will eventually occupy. I’m looking for an old large trailer that will be my permanent home.  ~~  I hadn’t  planned to become a CARE resident this early in my stay (I planned to volunteer month-after-month). This site will be available “after Thanksgiving” and I didn’t want it to get away from me. I’ll have lots of space for a container garden and shepherd’s hooks for bird feeders or hanging baskets. I can park my tiny trailer in the grassy area nearby. ~~ Can you visualize my eventual garden?? 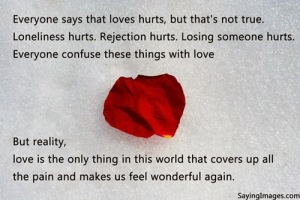 Postscript: Most of the CARE residents have an RV site like this (below)–and love the fact that they don’t have any maintenance. See why I jumped at “my” (eventual) site?? I want the extra yard!!!!!!!!